The Characters Behind “Hollow Hearts” – with a Giveaway

As you know, I love talking about historical romance here on Romancing History. That’s why I’m super excited to welcome author Donna Schlachter for the first time to my blog today.

Donna’s new release, Hollow Hearts, released yesterday and one of the things that has peaked my interest is that the couple is not the typical age for romantic fiction. As I age (a-hem), I’m finding love stories focusing on middle-aged couples very endearing.  Also the entire series is centered around the Pony Express so that is another huge factor in it’s favor. I’ve invited her to share with you some great background info about her characters and the story that I’m sure will wet your appetite to pick up a copy as it  has mine.

Before you leave, don’t forget to visit the Giveaway section at the bottom of this post and leave a comment. Donna is graciously giving away a print copy (U.S. only) of Hollow Hearts to one lucky Romancing History reader.

About Hollow Hearts
Hearts of the Pony Express, Book #2 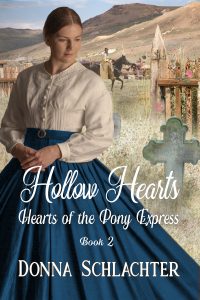 Middle-aged widow Edith Cooper walks away from the cemetery along the Green River near Simpson’s Hollow, Utah Territory. Away from the husband buried there this morning. Away from their plans and dreams for their future. Along the way, two men offer their hand in marriage. For her protection, one says. For his children’s sake, says the second. Were any of these reasons enough to marry? She must choose one. But which?

Albert Whitt, stationmaster of the Pony Express Station, loves his independent life. Twice stood up by women, he takes the only course that ensures no more rejection: stay clear of them. But when he learns that the stoic Widow Cooper is considering two proposals from men not worthy of lacing her boots, he must do something. But what?

Can Edith and Albert find a new beginning in the midst of tragedy, or will they choose the most convenient path—alone?

The Characters Behind Hollow Hearts

Edith Cooper is a forty-ish woman traveling west with her husband, Paul. They’ve been married for many years, but they’ve not had any children. This leaves a hole in Edith’s heart when Paul dies along the trail to Oregon.

Green River, Utah, provides the only suitable place for many miles to bury bodies. In fact, the soil is soft and relatively rock-free, and hundreds—if not thousands—are buried there.

As Edith leaves the cemetery, two men approach her independently. The local pastor, a widower with six rowdy children, suggests he could be the man she needs. After all, he’s obviously not deficient when it comes to producing offspring, and although he realizes Edith is getting along in years, no reason they couldn’t still enjoy the physical benefits of marriage.

Edith says thank you and she’ll think about it.

The second man is an alcoholic private who has been in the army for twenty-plus years, but because he keeps getting into trouble when he drinks, has been demoted to the lowest rank possible. He suggests he is the man for her because—well, because he is a man.

Edith, horrified by what could become her life, thanks him and says she’ll let him know.

Meanwhile, the station keeper at the Pony Express station looks on. Albert Whitt has no interest in Widow Cooper or any other woman. Jilted twice by women, he’s vowed never to marry. But he overhears the two proposals, and pities the woman desperate enough to accept either one.

Besides, Albert knows he no great catch for any woman. No wonder the other two chose others instead of him. He likes his job, and manages most tasks. However, his cooking skills leave something to be desired.

When Albert is injured, he needs help, and the only person he can find is the Widow Cooper. Her excellent cooking and baking skills garners a reputation for the Station, and folks come from town, both to dine and to order her pies and cakes.

Albert enjoys her company, and she seems to like being around him. He teaches her how to help saddle a horse, to transfer the mailbag, and she tackles all the other chores. But she’s leaving at the end of the week when the wagon train heads west again.

The pastor and the sergeant continue to pester Edith, insisting she give them an answer. The pastor’s rowdy children have no respect for her, and neither does he, apparently, when she brings them a cake at the church social.

Maybe she’ll stay, get her own lodgings, and find a job.

Or figure out a way to continue west.

Or return east where she and her husband came from.

Albert wants Edith to stay because he’d like to expand the kitchen and dining area at the station. But he also sees that having her around makes him miss her when she isn’t there. And that wasn’t part of his plans.

To find out which man Edith chooses, you’ll need to read the book, which is available on Amazon. 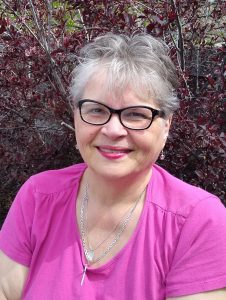 A hybrid author, Donna writes squeaky clean historical and contemporary suspense. She has been published more than 50 times in books; is a member of several writers groups; facilitates a critique group; teaches writing classes; ghostwrites; edits; and judges in writing contests. She loves history and research, traveling extensively for both, and is an avid oil painter.

www.DonnaSchlachter.com Stay connected so you learn about new releases, preorders, and presales, as well as check out featured authors, book reviews, and a little corner of peace. Plus: Receive a free ebook simply for signing up for our free newsletter!

Congratulations to our winner, Lexi H.

To enter the giveaway for a chance to win a print copy (U.S. only) or ebook of Hollow Hearts, leave a comment below and tell us if there is a favorite family name in your family?