This post first appeared on the Joy of Reading

Hello, Mrs. Robertson. I’m pleased to make your acquaintance. I’m a bit uncomfortable about being here in 2018, with a lady reporter and all, but Kelly and Ruthie encouraged me to stop by and visit with you and your readers today.

Kelly suggested I begin by telling your readers a little bit about myself. I’m from Pennsylvania and the eldest of four children. My father owns an orchard and had intended for me to inherit. I chose a different path after I witnessed the burning of my hometown, Chambersburg, by Confederate troops in July 1864. At the age of 16, I enlisted in the Union army and served in Tennessee. Not wanting to be a farmer, I didn’t return home after the war. Instead, I took work as a spike man on the railroad. Back breaking labor for sure. My efforts paid off and I moved up the ranks quickly to chain man and eventually a crew chief before being given the opportunity to apprentice as a surveyor with a land mapping agency. The apprenticeship took me to Virginia where I was tasked with assisting the Washington & Ohio railroad through Clark’s Gap and then over the Blue Ridge Mountains to Winchester. That’s when I had my chance encounter with Ruth Ann Sutton. The line went right through her hometown of Catoctin Creek, altering the course of my life forever.

TR: What first attracted you to Ruth Ann?

Benjamin: Well it certainly wasn’t her singing voice. She dearly loves to sing but can’t manage to carry a tune with a handle on it. As to your question, I’d have to say her curls. Although they tend to exasperate her, I find their unpredictable nature suit her quite well. But the more I got to know her the more I saw her intelligence and compassionate heart. Kelly tells me women in your century are keen to express thoughts and opinions. It’s rare in my time for a woman to be outspoken, especially before marriage. But I like that Ruthie shares her thoughts freely.

TR: In this century, Benjamin, avid readers of romance novels have book boyfriends. Is there an image of you that you can share with us today?

TR: Benjamin are you there?

Benjamin: I’m here … just a bit unsure what you meant by boyfriend. I had to check with Kelly and she said it’s similar to a suitor. Here’s my photograph. 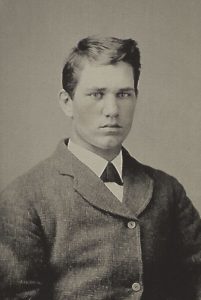 But this may be more what your readers are looking for. Kelly said this is how she pictured me in her head while writing the story. 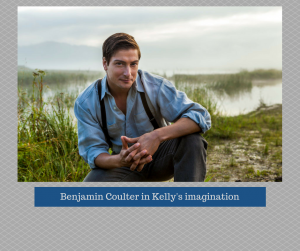 TR: Kelly has relayed that A Love Restored is based on her own real-life romance with her husband, Mike. Can you share with us in what ways you are like her husband? How are you different?

Benjamin: We both sure do love to tease our ladies about their singing voices. Is, Kelly going to read this? I mean between you and me, the woman’s voice could haunt the dead—just like my sweet Ruthie. Back to the question. Mike and I both joined the army. Although he never saw combat, he served as a chemical officer during the first Gulf War. We both enjoy Jules Verne novels but Mike listens to them on something called Audible where folks read you the book out loud. Can’t quite figure that one out. We both learned to bake from our grandmothers. My apple pie won a ribbon at the county fair. Between us, I think that gets under his skin a bit. Mike may not agree, but I think my sugar cookies are every bit as good as his. I’ll let you in on a little secret. He actually keeps a copy of that recipe in special box with other important papers that won’t catch on fire. Kelly said if your readers would like the recipe that inspired the baking scene in A Love Restored they could get that when they sign up for her newsletter.

TR: Some readers have wanted to purse whomp you, Benjamin. Is there anything you’d like to say them?

Benjamin: Go right ahead. I deserve it. Or at least I did. I know Kelly was hesitant to write this story at first because she worried how people may view us (her husband and myself) but Mike kept encouraging her to do it. Kelly shared with me that she found writing my character the most challenging part of the whole story. She feared people might give up on me when I grappled with Ruth Ann’s fuller-figure. She said romance readers usually prefer their leading men to be white knights and my armor had serious dents in it. But I think if we’re honest with ourselves, most of us are seriously flawed. As my friend Neil Peterson so aptly pointed out, “that’s why we need a savior.”

TR: Neil played a huge part in your change of heart. Can you share with us more about Neil and your relationship?

Benjamin: Neil is … well, the father I never really had. My own father was an angry drunk. I’m sorry to speak so ill of him but that’s the truth of the matter. Where my own father said I’d never amount to anything, Neil taught me to believe that my future wasn’t defined by my past. He came along side me and walked me through some dark times. Without judgement, he gently nudged me to examine what the Bible had to say, and it didn’t take long for the Holy Spirit to prod me to make serious changes in my lifestyle and eventually, in my attitudes.

TR: Ruth Ann had a fuller figure when you met her, and you were instantly attracted to her. What changed?

Benjamin: We’re back to the purse whomping issue, huh? Fair enough. Let me be clear that Ruth Ann didn’t change. I did, and the problem was all mine. Sure, I noticed that she was plumper than most of the ladies I’d been attracted to before but when she unpinned those long brown curls, I was done for. Not only does she have a beautiful smile, but she’s smart and possesses more courage and strength of conviction than most folks I know.

What changed? I did. Not the way I felt about Ruth Ann. I never stopped loving her but when the men on my crew poked fun of her round figure, I began feeling like she wasn’t enough or that I deserved better. You see, just like Ruthie had repeated ugly words about herself over and over, I’d made vows too—about what kind of woman I’d marry. Without me even realizing it, those words began to dictate my choices. I’d let everything get turned inside out and I didn’t have the courage to stand up in the face of ridicule and declare my true feelings. Instead of following God’s will for my life, I resisted because the wrapping on the gift He’d given me wasn’t to my liking. I’m ashamed to confess that, but that’s the way of it. I had to come to terms with my own prejudice and when I was finally able to admit that to myself and to God, He gave me new eyes for Ruthie and I no longer saw anything, but the beautiful, Godly woman Ruth Ann is.

TR: What advice do you have for those who may be struggling with similar issues today?

Benjamin: I’m not sure I’m in any position to give advice, but if any of your readers are struggling with an attraction to someone society says doesn’t measure up whether it be their weight, their income, the color of their skin, their job, or something entirely different, I encourage them to focus on the characteristics that drew you to them in the first place. While attraction is always part of the equation, lifelong relationships have their foundation in a solid friendship. Above all else, seek God’s direction for your life and the courage to follow it. You will never be disappointed when you walk the path He has chosen for you. I have no regrets. I’m confident you won’t either.

To learn more about the characters, setting, and history behind a A Love Restored, visit Kelly’s Pinterest Board.