In A Love Restored, my heroine, Ruth Ann Sutton, “can’t carry a tune with a handle on it” according to her beau, Benjamin Coulter. In one scene, I have her decorating the Christmas tree and I wanted Benjamin to stumble upon her off-key singing once again. While searching for the lines to the “Twelve Days of Christmas,” I stumbled upon something called Twelfth Night parties that were quite popular during the Victorian era. I knew right away that I wanted to incorporate such a party into the book and decided that Ruth Ann’s friend, Charlotte Peterson, would be the perfect hostess. 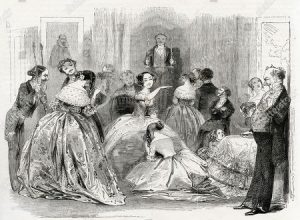 Traditionally the twelve days of Christmas begin on Christmas day and conclude on January 5 (or the twelfth night). The next day, January 6th, is the Feast of the Epiphany on the church calendar and honors the day when the Three Kings brought Jesus their gifts of gold, frankincense, and myrrh. Although not as popular in America, the Twelve Days have been celebrated throughout Europe since the Middle Ages. 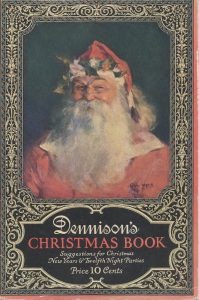 The highlight of the evening would be choosing the king and queen of the party. According to the 1923 Dennison’s Christmas Book, “there should be a King and a Queen, chosen by cutting a cake…”  Apparently, it was quite a large cake as one recipe I found called for a dozen eggs. Can you imagine? The Twelfth Night Cake would have both a bean and a pea baked into it. The man who finds the bean in his slice of cake becomes King for the night while the lady who finds a pea in her slice of cake becomes Queen. The new King and Queen sit on a throne and are adorned with “paper crowns, a scepter and, if possible, full regalia are given them.”

Games, singing carols, and dancing were a huge part of the evening’s entertainment. In A Love Restored, Charlotte and her party guests play a Victorian parlor game called Forfeits. In this game, an activity was chosen for all the guests to participate in. If the guest failed to complete the activity there was usually some kind of penalty in which you had to do what the winner asked. In ALR, the gentlemen requested the ladies sing, “The Twelve Days of Christmas.” If the women made a mistake, the gentleman could ask for restitution in the form of a ‘sweet,’ either an edible treat or a kiss on the cheek. Ruth Ann’s rival for Ben’s affections, Rose Martin, intentionally messes up hoping that Ben will ask for a kiss. Being a gentleman, and one who is smitten with Ruth Ann, he passes and asks for a peppermint instead. 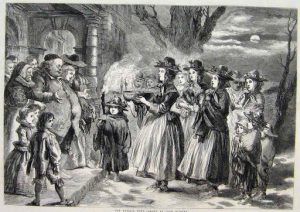 A popular beverage served throughout Europe on New Year’s Eve and Twelfth Night is wassail. Wassail comes from the Anglo-Saxon phrase ‘wases hael’ which means ‘good health’. Wealthier folks, however, were known to indulge in the drink throughout the twelve days. Wassail is mixture of mulled ale, curdled cream, roasted apples, eggs, cloves, ginger, nutmeg and sugar, and is often served with great fanfare and presented to those in attendance in a special Wassail bowl usually made of silver or pewter. Often people would take the wassail and present it as a gift to others. Here is a recipe for Wassail.

I’ve never attended a Twelfth Night party, but after learning about the custom it’s something I’d like to do. The history lover in me thinks it would be fun to host such a gathering and have those attendance come in period costume.