This interview was first published on Novel PastTimes

Tell us your name and a little bit about yourself

Thank you, Cindy, for inviting me to Novel Pastimes to share with you a little of my story. I am pleased to make your acquaintance. I’m Ruth Ann Sutton from Catoctin Creek, Virginia. 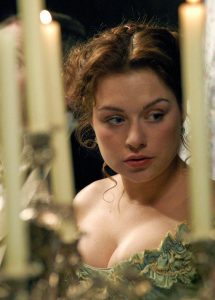 Daniella Denby-Ashe as Margaret Hale in North and South, a British period drama.

Kelly suggested I include this photograph. It’s not really me but it’s what I look like in her mind. I live inside her head you see. And just between you and me, it can get awfully crowded in there with all those other characters vying for her attention.

Anyway, I’m twenty years old and the youngest of two daughters born to my parents, Charles and Hannah Sutton. My father died suddenly when I was thirteen and I miss him terribly. I can usually be found wearing the locket he gave me. My older sister, Sarah, was married by my age. She is beautiful and petite—just like mama. I’m quite the opposite. With broad shoulders, round hips and a head full of unruly curls, I haven’t had many suitors.

Sometimes that is for the best, too much heartache. But I understand you are engaged. Would you like to tell us about your fiancé?

Oh, my heavens! Where did you hear that? From Tilly Hirst I imagine. That woman is always gossiping. The truth of the matter is I am not engaged—yet. James has not proposed, nor have I indicated that I will agree to such an arrangement. There is an understanding between our families, however, and mama is hoping we will be married within the year.

What are your reservations about marrying James? Is he unkind to you?

My, you are direct, aren’t you? I think we would get along splendidly if I lived in your century. When I marry, I will be expected “to take my place in society,” which is a fancy way of saying I have to join stodgy organizations like the Women’s Benevolent Aid Society and terminate my teaching position at the Freedman’s School. Married women are not allowed to hold such positions.

If you don’t mind me being frank, which I am prone to be, the real reason I’m hesitant is that I believe he’s more interested in my familial connections than me, as a woman. James is the son of a prominent Virginia politician. Although we get along just fine, I find him a bit dull. Mama says I should be grateful for his attention. I’m not sure how long I can postpone our nuptials, but what I want more than anything is for a man to love and accept me as I am—fuller figure and strong opinions included. But I’m not sure such a man exists. Look at me prattling on and I barely know you. If mama were here, she’d remind me that “young ladies should be seen and not heard.”

Is there perhaps another man who has caught your eye? If so, was it love at first sight or did he have to grow on you?

I did have this chance encounter with Benjamin Coulter at the creek the other day. Although I thought his eyes were a delightful shade of amber, like honey drizzling on a warm biscuit, there was hardly an immediate attraction. His dirty, disheveled appearance startled me (I can’t abide a man with whiskers). He was one of those railroad men mama had warned me about. Concerned he had nefarious intentions, I grabbed a rather large stick and threatened to pummel him if he didn’t keep his distance. One thing led to another and I fell into the creek. It truly was a disastrous first impression.

I think I sense a growing interest in this gentleman as opposed to James?

You are very perceptive. But mama disapproves because he does not come from a family of means and has “nothing to offer me.” I disagree. He likes to read Jules Verne and he supports my teaching the Negro children. Although he thinks I’m stubborn, he seems to like my feisty personality. Something just comes alive inside when I’m around him.

You sound like a strong woman? Are you happy with yourself?

At times, yes. Although mama says my opinionated nature is my biggest fault, I like that I express my thoughts and stand up for what I believe. My fuller-figure, however, has been the source of significant self-doubt and heartache, especially when it comes to suitors. Many unkind things have been spoken to me regarding my appearance. I repeated things to myself over and over again until I no longer saw much of anything to esteem. A Love Restored chronicles my journey to self-acceptance and how I learned to see myself as our heavenly Father does—fuller figure and all.

What can the reader learn from your struggle to overcome self-doubt?

Kelly’s book, A Love Restored, is not only a story of love, romance, heartache and restoration, but also a story about the power of words over our lives. It is a story about the struggle each of us faces to take our thoughts captive to the truth of Scripture so we may experience the fullness of God’s unequivocal love for us. As Benjamin and I discover, it is only then that we are truly able to give and receive love, unconditionally.

Our prayer (Kelly’s, Benjamin’s, and mine) is that you and your lovely readers will not allow the enemy to steal the joy that is rightfully yours as a child of God. Speak the truth of the Gospel over yourself every day and ask God to give you His eyes to see yourself as He does. (1 Samuel 16:7b)

To learn more about the characters, setting, and history behind A Love Restored, visit Kelly’s Pinterest Board.