I’m so thrilled to welcome historical romance author and sweet friend, Misty M. Beller to Romancing History today. I had the pleasure of meeting Misty online. Misty was one of the earliest authors to read my first couple of chapters “when I thought” the manuscript was ready for publication. She gave me invaluable advice that we laugh about now like “you should have your H&H (hero & heroine) meet before chapter nine! LOL!

Misty writes romantic mountain stories set on the 1800s frontier woven with the truth of God’s love. Her most recent novel, A Warriors Heart, released August 31st, and is the first book in her Brides of Laurent series, her second with Bethany House Publishers. Before we chat with Misty, here’s a little bit about Misty and her new book. 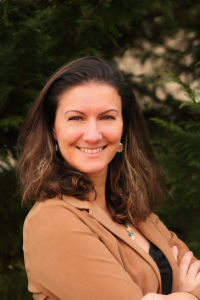 Misty M. Beller is a USA Today bestselling author of romantic mountain stories, set on the 1800s frontier and woven with the truth of God’s love.

Raised on a farm and surrounded by family, Misty developed her love for horses, history, and adventure. These days, her husband and children provide fresh adventure every day, keeping her both grounded and crazy.

Misty’s passion is to create inspiring Christian fiction infused with the grandeur of the mountains, writing historical romance that displays God’s abundant love through the twists and turns in the lives of her characters.

Sharing her stories with readers is a dream come true for Misty. She writes from her country home in South Carolina and escapes to the mountains any chance she gets.

Her heart longs for peace, but peace won’t keep them safe. 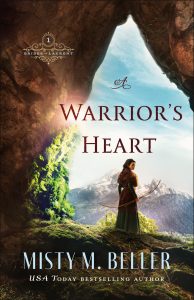 Brielle Durand is still haunted by the massacre that killed her mother a dozen years before. Vowing to never let it happen again, she’s risen to be the key defender for her people’s peace-loving French settlement living in hidden caves in the Canadian Rockies. When a foreigner wanders too near to their secret home, she has no choice but to disarm and capture him. But now, what to do with this man who insists he can be trusted?

Hoping to escape past regrets, Evan MacManus ventured into the unknown, assigned to discover if the northern mountains contain an explosive mineral that might help America win the War of 1812. Despite being taken prisoner, Evan is determined to complete his mission. But when that assignment becomes at odds with his growing appreciation of the villagers and Brielle, does he follow through on his promise to his government or take a risk on where his heart is leading him? Either choice will cause harm to someone.

Brielle and Evan must reconcile the warring in their hearts to have any hope of finding peace for their peoples.

RH: I’m very happy to tell you that you answered #1 above correctly. It would  have been an embarrassingly poor start to our conversation otherwise. (LOL!) Tell us a little bit about yourself. How long you’ve been writing? How many books you have published and what era(s) do you write?

MB: I’ve always been an avid reader, but didn’t attempt to write my first real book until 2013. Though that first book was supposed to be a one-time check-off on the bucket list, I realized I really love writing! I’m currently working on book #32. All are Christian historical romance, and most are set in the Rocky Mountains. I realized early on I love those adventurous stories in remote settings with strong heroines and mountain man heroes.

RH: Wow, 32 books? I can’t even….I’m not sure I’ve read them all but I know I’ve read most of them and enjoy your rugged mountain heroes! Now tell us something unusual about yourself. Something not in the typical back of the book author bio—something quirky.

MB: Oh boy. It seems like my life stays in the unusual category these days! I’m a wife and mom of four kiddos, with one more unexpected little one on the way (she’ll be joining us in November). We just moved last week to the family farm, and it’s wonderful to be back within walking distance of Grandma’s house and all the cousins. We’re in temporary quarters though. Until our permanent home is ready, all six of us (and soon to be seven) are tucked in an RV. Definite bonding time!

RH: Seven people in one RV? That’s not quirky, it’s crazy! LOL! I hope that there are no delays finishing your home. Writing historical romance in a cancel culture world can be very challenging. Have you been tempted to shy away from specific time periods or plotlines out of concern that that the subject matter might offend readers?

MB: This is a really interesting question, and definitely one that’s affected me, though I haven’t really shared my thoughts with readers. I don’t generally like to shy away from settings or characters because of the way our culture views them today. I love history and try to stay as true to the setting as I can. I also firmly believe that no group of people should be judged as a whole on their general reputation. People are individuals, and there are good and bad in every race and time period. I work hard to portray that clearly through my characters.

However, I’ve definitely experienced situations recently where my books portraying certain races aren’t accepted by some of publishing’s gatekeepers, either because I’m not the same race as the characters, or because there’s so much hesitation about how today’s culture would view them. It’s sad that the push to be more “fair” has created the opposite effect so many times.

RH: I really like what you said about good and being found in all races. I think I’d add in all individuals. We see historical figures being discredited for their positive contributions because of beliefs or actions that weren’t uncommon in their era. That doesn’t mean we should excuse it, but we also can’t judge people by modern sensibilities that didn’t exist when they lived. I better move on or I’ll be permanently on my soap box! What is the most difficult thing about writing characters of the opposite sex?

MB: Hmm… Maybe the dialogue. Growing up, my older brother was my best friend, and he’s kind a quiet guy. I find that I draw many of my male character traits from him.

RH: I think dialogue is tough. I have a critique partner that is great at pointing out dialogue she thinks doesn’t ring true. Setting is as important to story as character development and plot. You’ve written 32 books all set in the Rocky Mountains. What about these rugged and somewhat untamed peaks has captured your imagination? Is this a frequent travel destination for your family or perhaps somewhere you’d like to retire?

MB: There’s something about the mountains, especially the Rockies, that really speaks to my soul. The majesty of them is inspiring and seems to draw me closer to God. There’s a quote in A Warrior’s Heart that kind of sums up what I have trouble describing sometimes. 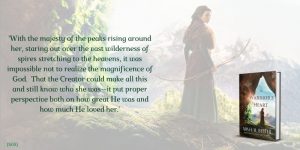 RH: Although I’ve only seen the fringe of the Rockies at Pike’s Peak, Colorado, I also love the mountains! You are a successful self-published and traditionally published author. Do you have a favorite character, book, or series among your titles?

MB: Oh, boy. That’s almost like trying to pick a favorite kid. There are a few that stand out, like Leah and Gideon from The Lady and the Mountain Man (book 1 in The Mountain Series). Also, Simeon and Emma from This Treacherous Journey (book 6 in that same series. But now I’m feeling bad that I haven’t mentioned all the others. Each character and book and series are so unique and special to me in different ways.

RH: That was kind of mean of me to make you choose, wasn’t it? I have to say I’m rather fond of Caleb Jackson from Courage in the Mountain Wilderness (Book #4 in your Call of the Rockies series). What was the inspiration behind your latest release, A Warrior’s Heart?

MB: Several different things, but the main idea came when I was listening to a historical podcast a few years ago that talked about the Vikings and the female warriors who would sometimes gain fame among them. As the hosts talked about the first Viking raids to North America, I started thinking… “What if one of those groups went farther west than any of us thought? What if they found the Canadian Rockies and lived there in a hidden community for centuries?” The thought took hold, and little by little, the idea for the Brides of Laurent series came to life. I eventually changed the village to be a French settlement named Laurent.

RH:I love how ideas come out of nowhere and stir in your imagination. Can you relay a historical tidbit that you learned while researching A Warrior’s Heart?

MB: The explosion I refer to in the book is similar to an atomic bomb, though probably not that large. Even before the War of 1812, scientists were learning the unusual radioactive capabilities of the mineral they called Pitchblende, which we know today as Urananite. While they didn’t have the official names for what the mineral could do, the way the radioactive crystals would glow in the dark made it fascinating, even for the elite who wore Pitchblende crystals as glow-in-the-dark jewels.

RH: That’s fascinating. I’ve never heard about that before. Do you have a favorite quote from A Warrior’s Heart you’d like to share?

MB: There are a few that jump out. Which one is your favorite?

RH: I’m a romantic at heart so I definitely like the second quote best. Gives me goosebumps. What are you working on now?

MB: Book 3 in the series! The heroine is Charlotte, Brielle’s younger sister, and it’s been so much fun getting to know this grown-up spunky version of her!

RH: Well, that will be something to look forward, too. I had so much fun chatting with you, Misty. I can’t believe we haven’t done this sooner. Thanks for visiting with my readers today and best wishes for success with your new book release!

**This giveawy is now closed**

Congratulations to our winner, Cherie J!

Misty has graciously offered a copy of any one of her previous books to one Romancing History visitor—Winner’s Choice! To enter, tell us which of the quotes above from A Warrior’s Heart is the most intriguing to you.

Why I Write Historical Romance