I’m so excited to welcome fellow historical romance author, Kathleen D. Bailey, back to Romancing History. Kathleen has a timely message for us about how the Babe of Bethlehem is the answer the world needs, at Christmas, and throughout the year.

From the Back Cover

Red Dawn’s world was shattered in a single vengeful act, an act that brought her to into the home of the enemy. She couldn’t love a white man, not after what they did to her people. Could she?

After losing a limb serving his country, Laban Jones has built a life from nothing. He’s got more than he dares ask for, but what woman would accept a one-legged husband? Can he offer Red Dawn three-quarters of a man, and will she be content with that? The answer they receive on a Christmas Eve is a miracle neither will ever forget.

“The Widow’s Christmas Miracle” is part of Pelican’s “Christmas Extravaganza” and is available at Pelican Book Group and Amazon.

Christ is the Answer

“The people who walked in darkness have seen a great light.” 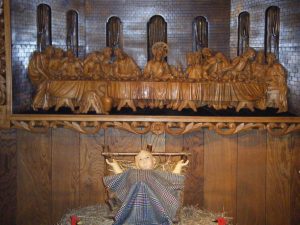 The Babe of Bethlehem is placed under the Last Supper in the Chapel at Our Lady of La Salette, Enfield, NH.

It’s never been easy to be a Jew, and it wasn’t easy in 1 BC. Rome controlled Israel and every aspect of Jewish life, from taxes to burden-bearing. The people longed for deliverance. There was poverty, especially after the Jews paid their taxes. There was corruption, as the local and regional officials took a piece of those taxes. And those earlier days had their own plagues and diseases, including the dreaded leprosy, which could devastate a family for generations.

“And the angel said to them, ‘Fear not. For unto you is born this day in the city of David a Savior which is Christ the Lord.”

But the Gentile world also longed for a deliverer. Many had had their fill of the made-up gods who weren’t any better than the humans who followed them…the gods who cheated and manipulated and rutted like animals and exploited humanity. They wanted something better. They wanted something real. Learned men from an Eastern land were pretty sure they’d found it. Or Him.

“When they saw the star, they rejoiced with great joy.”

We live in a world with its own corruption and unfairness. The Coronavirus changed the world as we knew it, every facet of modern life, from ordering a coffee to visiting a loved one in long-term care. Our world has suffered a sea-change, which has left many of us struggling to reach a life preserver.

But He’s already here. He was the Jews’ hope as they lived under the humiliation and rapaciousness of a foreign power, as their dignity was stripped on a daily basis. He was the Gentiles’ hope as they searched for a better way than unscrupulous “gods” who didn’t exist in the first place. 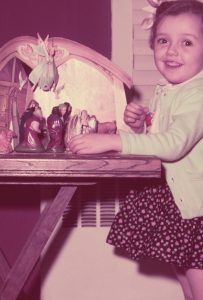 The guest blogger with her family Nativity set some time in the 50s. The wonder never grows old.

I write historical Christian fiction, and I’ve made it my mission to establish Him as the Better Way for my characters. I write historicals because every human emotion, and condition, is magnified by the strictures of earlier times. People on the Oregon Trail didn’t have the CDC to tell them how to deal with cholera. They had to figure it out themselves. Regency heroines couldn’t just go out and get a job when Papa lost his fortune. They had to hope, pray and hang on for dear life until the right suitor came along. Women died in childbirth and desperate men ordered mail-order brides to care for their children. Christ was and is the answer, leading the pioneers to an understanding of that disease, leading the Regency spinster to the man meant for her, helping the lonely widower find love again in a woman he barely knew.

And, Christ was the answer for the young couple in my Christmas novella, “The Widow’s Christmas Miracle.” Red Dawn, the young Cheyenne woman, loathes the white race after two rogue Cavalrymen burn her village and kill her young husband. The last place she wants to be is with white shopkeeper Laban Jones, who takes her in while her brother-in-law tries to avenge their village. She hates whites, and hates gentle Laban by association. Laban lost a leg, ending his Army career, and while he manages on his trading post and homestead, he doesn’t think any woman, especially Red Dawn, wants to be saddled with “three-quarters of a man.”

Who can bring these two stubborn souls together, and help them to be more than the sum of their parts?

The Babe of Bethlehem, who will heal all our diseases – and our land. 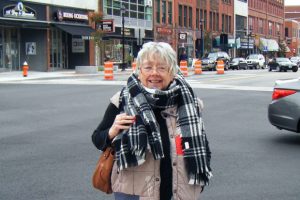 Kathleen D. Bailey is a journalist and novelist with 40 years’ experience in the nonfiction, newspaper and inspirational fields. Born in 1951, she was a child in the 50s, a teen in the 60s, a young adult in the 70s and a young mom in the 80s. It’s been a turbulent, colorful time to grow up, and she’s enjoyed every minute of it and written about most of it.

Bailey’s work includes both historical and contemporary fiction, with an underlying thread of men and women finding their way home, to Christ and each other. Her first Pelican book, ‘‘Westward Hope,” was published in September 2019. This was followed by a novella, “The Logger’s Christmas Bride,” in December 2019. Her second full-length novel, “Settler’s Hope,” was released July 17, 2020.

She lives in New Hampshire with her husband David. They have two grown daughters.

Congratulations to our winner, Rebecca Waters!

Kathleen has graciously offered an e-Book copy of The Widow’s Christmas Miracle and a New England gift pack to one Romancing History reader. To be entered in the drawing, please comment below and tell us how, despite the many unique challenges that 2020 has presented, have you seen the light of Christ’s hope in the world reminding you that He alone is the answer?