The Drummer Boy of Chickamauga 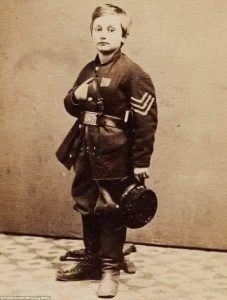 Image Courtesy of Library of Congress

Every now and then I stumble on some little footnote of history that absolutely fascinates me. This summer while on vacation, my husband and I toured the Chickamauga Battlefield and learned about a young soldier named Joseph Klem. And, by young, I mean very young. During the Battle of Chicamauga, Klem, who was now known as “Johnny Clem,” was a mere 12 years old.

Our story begins in May of 1861 when little Joseph, age 9, ran away from his home in Ohio to sign up with the Union Army only to find out the Federal Army (3rd Ohio Regiment) wasn’t in the business of  “enlisting infants.” Determined to find his place, Clem approached the commander of the 22nd Michigan and was again rebuffed. Undeterred, Clem tagged after the regiment acting out the role of a drummer boy. His persistence paid off and Clem was allowed to remain with the unit performing various camp duties for which he was paid $13 a month. Since he was not officially enlisted in the Union Army, Clem’s salary was paid collectively by the regiment’s officers. 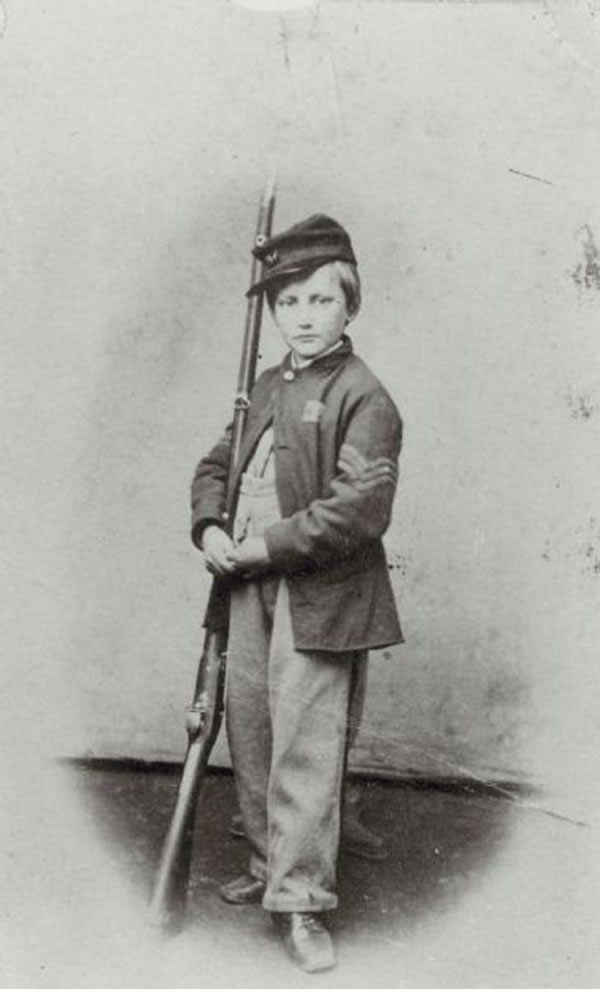 In April of the following year, Clem’s drum was struck by an artillery round during the Battle of Shiloh. This garnered the boy some minor attention from the press who dubbed him “Johnny Shiloh, The Smallest Drummer.” Not long after, Clem was officially enrolled in the Federal Army, received his own pay, and was promoted to the rank of sergeant—the youngest non-commissioned officer in U.S. Army history at the unbelievable age of 12.

But it wasn’t until September of 1863 that young Johnny came to national attention. During the Battle of Chickamauga, he joined the 22nd Michigan in the defense of Horseshoe Ridge wielding a musket that had been sawed down to his size. As the Rebels surrounded Union forces, a Confederate officer is reported to have shouted at Clem, “Surrender you damned little Yankee devil!” Johnny stood his ground and shot the colonel dead. This demonstration of fortitude earned Clem national recognition and the moniker, “The Drummer Boy of Chickamauga.”

Following the Civil War and a failed attempt to attend West Point, Clem made a personal appeal to President Ulysses S. Grant, his commanding general at Shiloh, for an appointment to the Regular Army. On December 18, 1871, Clem became a 2nd Lieutenant in the United States Army and in 1903 he attained the rank of Colonel and served as Assistant Quartermaster General. After 55 years, Clem retired from the Army as a Major General in 1916—last Civil War veteran to actively serve in the U.S. Army.

General Clem, The Drummer Boy of Chickamauga, died in San Antonio, Texas on May 13, 1937, exactly 3 months shy of his 86th birthday. He is buried at Arlington National Cemetery.

I love nerdy history snippets like this? Had you heard of  The Drummer Boy of Chickamauga before reading this post?