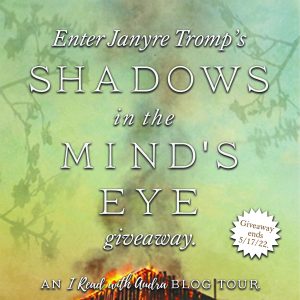 Welcome to the I Read with Audra book tour for Shadows in the Mind’s Eye.

Debut novelist Janyre Tromp offers readers a story rich in the tradition of Hitchcock with a hint of psychological thriller. She takes readers back to 1940s Hot Springs, Arkansas and explores the illness now known as PTSD (post traumatic stress disorder), its effects on families when soldiers returned home, and a persistent love in a world determined to destroy it.

Tromp’s inspiration for Shadow’s in the Mind’s Eye was her own grandparents’ stories of adjusting to life when her grandfather returned home from World War II. Back then, soldiers returning home rarely talked about their experiences and the difficult adjustment of “getting back to normal.” In the process of writing the story, Janyre did extensive research on treatments for what was known as battle fatigue at the time. She also drew on personal experiences in dealing with PTSD herself.

I’m excited to be part of this tour and introduce Romancing History readers to this intriguing historical suspense novel. Make sure you visit the Giveaway section so you can enter to win a great prize package from Janyre! 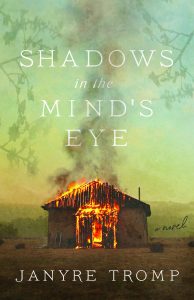 Charlotte Anne Mattas longs to turn back the clock. Before her husband, Sam, went to serve his country in the war, he was the man everyone could rely on–responsible, intelligent, and loving. But the person who’s come back to their family farm is very different from the protector Annie remembers. Sam’s experience in the Pacific theater has left him broken in ways no one can understand–but that everyone is learning to fear.

Tongues start wagging after Sam nearly kills his own brother. Now when he claims to have seen men on the mountain when no one else has seen them, Annie isn’t the only one questioning his sanity and her safety. If there were criminals haunting the hills, there should be evidence beyond his claims. Is he really seeing what he says, or is his war-tortured mind conjuring ghosts?

Annie desperately wants to believe her husband. But between his irrational choices and his nightmares leaking into the daytime, she’s terrified he’s going mad. Can she trust God to heal Sam’s mental wounds–or will sticking by him mean keeping her marriage at the cost of her own life?

The novel has a slow, but steady start that I liken to a roller coaster making its steady, gradual ascent of that first towering peak. I believe this is deliberate on the part of the author so we can not only get immersed in the southern mountain culture but can become attached to the main characters because once the plot crests that first peak, you’d better be buckled in because the ride will take you on so many twists and turns you’ll be doubting what you think you know about nearly everything and everyone in this perfectly crafted historical suspense story.

DO NOT mistake that for a sluggish or boring beginning. “For sure and for certain,” Tromp has written an emotionally gripping cast of characters and possesses a true gift for southern dialogue. Despite Sam’s mental health issues that will leave you pondering what is real and what is only in his “mind’s eye,” I was cheering for him to get it all sorted out and at least discover a large enough portion of the man he was before the war so he could find peace in his own heart and with “his girls,” wife Annie and daughter Rosie. But many other challenges face Sam upon his return home including his wife, Annie, still haunted by the ghosts of her own abusive past at the hands of her father. His younger brother, Peter, who returned home much earlier from the war after losing his hand, seems to have taken his place as daddy to Rosie, and his best friend, Doc, appears to be a little too friendly with Annie. Not to mention that Hot Springs has become a hotbed of mob activity. And Sam, like the reader, is left to sort out what is real and what are figments of Sam’s battle fatigued imagination.

The whiplash from all the psychological twists is softened by the wit and wisdom of the utterly charming, Dovie May, Sam and Peter’s mother, who is determined to steer her son and daughter-in-law Annie toward one another and their faith, as their only hope to rebuild all the war has taken from them.

I listened to Shadows in the Mind’s Eye on Audible and was thoroughly delighted with this audio production. Sam and Annie’s voices were brought to life by narrators Matt Godfrey and Sandy Rustin who flawlessly captured the main characters’ southern dialect and drew me into the post-WWII era. If you enjoy audiobooks, I highly recommend this Recorded Books production.

Although I received a copy of this book from I Read with Audra Book Tours, I also purchased this story on Audible. I was not required to leave a positive review. All opinions are my own.

“Happily ever after don’t happen lessen each person in a marriage works. It’s like a team of horses . . . They both have to carry their own load.” ~Dovie May

“The only way you see a miracle is to believe in them first.” ~Dovie May

“Light sneaks through the broken places.” ~Dovie May

We never want to travel beyond the point where everybody’s happy. But life’s everything after, and the question is, what are you going to do with the truth life drops in your lap?” (and dag gone it, I forgot to note who said this)

“You’d think  holding joy right up against sadness would shatter a body. But it don’t. Joy, it sneaks in all around, sticks everything together, and finds a way to make you whole.” ~Dovie May

“One thing I know for certain is that memory’s a slippery thing. It changes and morphs…It gets so that no one’s ever quite sure what actually happened.” ~Annie

“Trying to pin down the cost of your choices is more than a little like trying to figure out the height of your shadow.” ~Doc

“…and sometimes God uses broken things to save us… Ain’t no light that can get through something solid. It sneaks through the broken places.”
~Dovie May

Broken…flawed…that is what so many of us are as are the characters in Shadows in the Mind’s Eye. Who doesn’t feel broken from the depth of depravity and utter lack of humanity we see in the world on a daily basis? Who among us hasn’t suffered a broken heart, lost a loved one, felt alone, unseen, or less than? In our human strength, we try to super glue the pieces back together, put on a brave face, and attempt to protect our wounded soul from further damage.

But there is tremendous value in being broken because it’s in those moments, and in those dark places where we feel the deepest fissures that Christ’s redemptive work on the cross does its healing work. It’s the brokenness that sends us searching Scripture for answers, that makes us cry out to a God we otherwise ignore, that brings us to our knees acknowledging that we can’t do it without Him. And, it’s the cracks in our broken shell that lets His light nurture our weary soul.

“Again Jesus spoke to them, saying, “I am the light of the world. Whoever follows me will not walk in darkness, but will have the light of life.”
John 8:12 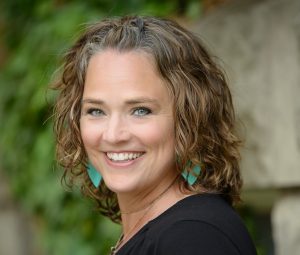 Janyre Tromp (pronounced Jan-air) is a historical suspense novelist who loves spinning tales that, at their core, hunt for beauty, even when it isn’t pretty. She’s the author of Shadows in the Mind’s Eye and coauthor of It’s a Wonderful Christmas.

A firm believer in the power of an entertaining story, Tromp is also a book editor and published children’s book author. She lives in Grand Rapids, Michigan with her husband, two kids, two crazy cats, and a slightly eccentric Shetland Sheepdog. 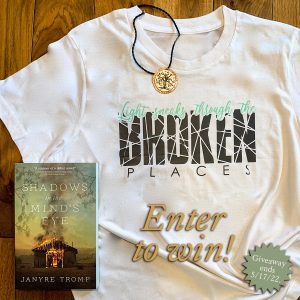