In 20th Century America, Why Do We Say That?

In January 1920, America went dry as the 18th amendment took effect prohibiting the manufacture, sale, transport and/or  consumption of alcoholic beverages. Speakeasies, or illegal drinking establishments, derived their nickname from the practice of asking patrons to be quiet, or speak easily, about the illegal bar’s location.  Also known as a Juice Joints, they flourished in big cities like New York and Chicago between 1920-1933.

Here’s a list of phrases common during the time among those who fronted these illegal gin joints and those who frequented them.

Bootleggers is a euphemism for booze smugglers. They took they’re name from Cowboys who smuggled flat bottles of whiskey inside their boots onto Indian reservations to trade with the natives after the practice had been prohibited. Smugglers during Prohibition adopted their name.

Skid Road–A precursor to the term “Skid Row,” a skid road was the place where loggers hauled their goods. During Prohibition, these “roads” became popular meeting places for bootleggers, smugglers and gangsters to meet and do business.

Sing Like a Canary–informants who blabbled or “sang” to the the cops.

Gangbusters was a 1930s radio program. The broadcast began with blaring sirens so anything loud and obnoxious comes on like “gangbusters.”

Teetotaler–A person who abstains from the consumption of alcohol. The phrase is believed to have originated within the Prohibition era’s temperance societies, where members would add a “T” to their signatures to indicate total abstinence (T+total-ers). 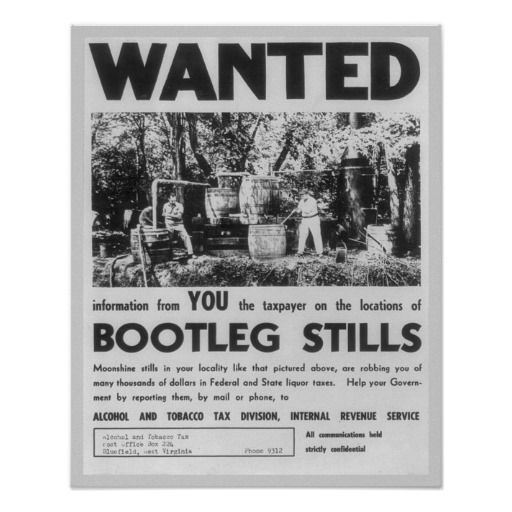 Bathtub Gin–Homemade gin, usually of poor quality, that would be mixed with flavorings to improve the taste. Because the bottles were too tall to be mixed with water from a sink tap, metal or ceramic bathtubs would be used.  Though the phrase references gin specifically, it came to be used as a general term for any type of cheap homemade booze.

Hooch–any low-quality liquor, usually whiskey. The term originated in the late 1800s as a shortened version of “Hoochinoo,” a distilled beverage from Alaska that became popular during the Klondike gold rush. The phrase came back into heavy use in the 1920s. 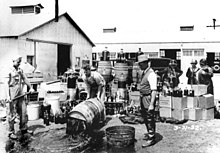 Dry–A  man or woman who is opposed to the legal sale of alcoholic beverages. Bureau of Prohibition agents were often referred to as Dry Agents. It also is used to reference places where alcohol is not served, i.e. a “dry country”.

Jake Walk–A paralysis or loss of muscle control in the hands and feet, due to an overconsumption of Jamaican ginger, a.k.a. Jake, a patent medicine with a high alcohol content. The numbness led sufferers to walk with a distinct gait that was also known as Jake leg or Jake foot. Jamaican ginger, a patent medicine with a high alcohol content – so high that authorities insisted manufacturers up the ginger content so that it became bitter and unpalatable. Bootleggers responded by adding a plasticizer, tricresyl phospate, that would fool government tests and keep it drinkable for those who used it recreationally. Unfortunately, the additive turned out to be a neurotoxin and some 50,000 people fell victim to jake-walk or jake-foot which often led to  permanent paralysis. 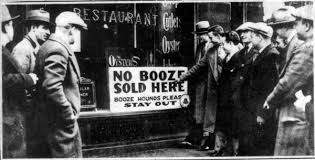 A Blind Pig–low class drinking establishments often located in counties or municipalities that had voted themselves “dry.”  They often charged admission to view some kind of attraction like a pig painted in stripes or other such “exotic” creatures. Admission, surely by coincidence, included a free glass of whisky. Also known as blind tigers, the owner’s identities were often concealed, even from its patrons.

Prohibition ended in 1933, but the colorful colloquialisms it brought about continue to add character to American language today.