National Tell a Fairy Tale was February 26th. In order to commemorate this auspicious day, I thought maybe remembering the lives of some of the most well-known storytellers of all time would be in order–The Brothers Grimm. 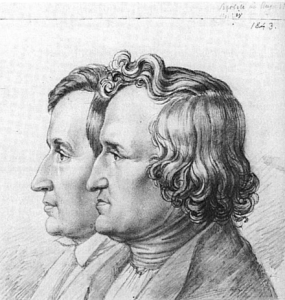 Jacob and Wilhelm Grimm in an 1843 drawing by their younger brother Ludwig Emil Grimm.

Jacob and Wilhelm Grimm began their careers studying law. Privately their fascination with the myths and legends surrounding local folklore led them to begin researching these tales in earnest.

Here’s 4 interesting facts you may not know about the the Grimm brothers:

The Grimm Brothers didn’t write any of the fairy tales associated with them.

Although stories like Snow White and Rapunzel have become synonymous with their name,  none of the tales included in their first anthology, Nursery and Household Tales, was written by either Jacob or Wilhelm Grimm. Most of the stories existed long before the brothers were born in the mid-1780s. The tales were actually a collection of rich oral traditions passed from generation to generation. When the brothers discovered there was not one written collection of the stories, the began a quest to interview friends and relatives to capture the folklore before they became extinct and took great care to preserve the tales as they were told by peasants and villagers. 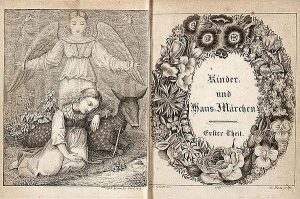 Cover of the 1819 edition of Nursery and Household Tales illustrated by Ludwig Emil Grimm.

Their collection of stories were not originally intended for children.

The original 1812 edition of Nursery and Household Tales contained sex, violence, and extensive footnotes regarding the variances in the folklore from region to region. And it contained no illustrations. The original version of Cinderella had the evil stepsisters cutting off their toes and heels in an effort to squeeze their appendage into the infamous glass slipper. Not to be out done, the first edition of Rapunzel had the girl with child following a casual affair with the prince.

The Grimm Brothers were a publishing success story.

By Wilhelm’s death in 1859, what we now know as Grimm’s Fairy Tales was in its 7th edition and the anthology had grown to include 211 stories. The collection now featured intricate drawings as well. Today Grimm’s Fairy Tales is available in over 100 languages and have been adapted for stage and screen by Walt Disney and Lotte Reineger. 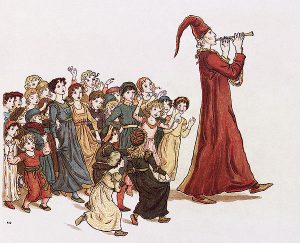 Illustration of “Pied Piper of Hamelin” from the Grimm’s collection of German legends. Illustration by Kate Greenaway

Following the success of Nursery and Household Tales, the brothers also published two volumes of German folk legends which include stories such as The Pied Piper of Hamelin. In addition they wrote several books on mythology, linguistics and medieval history. In their later years, the brothers took a teaching position at Gottingen University as professors of Germanic studies and began a massive project to write a dictionary of the German language. They both died before the enormous undertaking was complete having only reached the letter F and the word frucht, meaning fruit.

Fairy Tales continue to capture the imagination of the public around the world and with the growing popularity of movies like Into the Woods and television shows like Grimm and Once Upon a Time it’s as clear as Cinderella’s glass slipper that even grown-ups love a good fairy tale.

Share your favorite fairy tale in the comments below.