Tag: Heart of a Warrior

Although today’s guest, Angela Couch, has visited Romancing History on numerous occasions, I’ve never sat down with her for an interview. Grab a cup of hot tea, or coffee if you prefer, put your feet up, and let me introduce you to one of my dearest writing friends.

Shameless plug, if you haven’t read Angela’s Heart at War series, I highly recommend these Revolutionary war stories that pit Loyalists against Patriots.

Angela has graciously agreed to offer a $5 Amazon gift card to one Romancing History reader. To enter, see the Giveaway section at the bottom of this post.

Before the interview, let’s learn a little bit about Angela and her new release, Heart of a Warrior.

To keep from freezing in the Great White North, Angela K. Couch cuddles under quilts with her laptop. Winning short story contests, being a semi-finalist in ACFW’s Genesis Contest, and a finalist in the International Digital Awards also helped warm her up. As a passionate believer in Christ, her faith permeates the stories she tells. Her martial arts training, experience with horses, and appreciation for good romance sneak in there, as well. When not writing, she stays fit (and warm) by chasing after four munchkins. 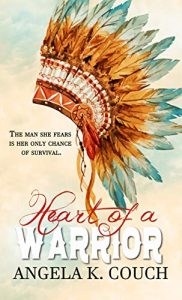 The Man She Fears Is Her Only Chance For Survival . . .

Disgusted by the greed and cruelty of men like his white father, Towan has turned to the simpler existence of his mother’s tribal people. He is not prepared for the fiery woman who threatens to upturn his entire life … and his heart.

RH: I’m so tickled to have you back on Romancing History, Angela. How is it that we’ve never done an author interview before? Why don’t you begin by telling us a little bit about yourself.

AC: I am the mom of 4 awesome kiddos under 10 – three boys and a girl. We are also very excited for #5 who should make his or her debut in Feb! I home school my oldest three and write when I have a few minutes during naps and afternoon play (thankfully my kids play together really well!) As far as writing goes, it has been hard settling into an era. My first series is set during the American Revolution and I have shorter stories spread between Colonial days and WWII. My latest release is late 1850s on the Oregon Trail.

RH: Congratulations on the new baby Couch on the way! I’m so impressed by all the different time periods you’ve written about. Fans of romantic fiction love a cute meet. How did you and your significant other meet?

AC: Technically, I met my husband at church when he was visiting his sisters, but I still don’t remember that. The meeting I remember happened about 4 months later when he came to visit his sister who was now my roommate. I had spent the morning writing in my fuzzy PJs and housecoat, and had just emerged to eat something—though it was early afternoon. We chatted in the kitchen for a while with his sister and I remember thinking two things: 1) I feel like we’ve met before, and #2) I really want him to like me.

RH: You must have made quite the impression, even in your fuzzy PJs and house coat! So if you were already writing at that time, about when did you first feel the calling to tell stories?

AC: I always loved the idea of writing books even before I could write. I would draw squiggles across pages until I had a nice thick stack. When I was a teen I started my first novel and set the goal to be published…someday.

RH: I’m always a bit jealous of those authors who’ve known they wanted to write as soon as they could hold a pencil. I didn’t start writing until my late 40s. Speaking of your writing, what three words best describe the type of stories you write?

RH: As a huge fan of your books, I’d have to say you hit the nail on the head. Do you have any unpublished stories stashed away that you really hope see the light of day someday?

AC: There are two stories I would like to find a home for. One is a post WWII story, exploring buried pain and trauma from the war and attempts to recover past loves. The second is a series I am working on right now about dashing Canadian Mounties.

RH: Since we are critique partners, I’ve had the privilege of reading these stories and I, too, am hoping they find a home so that readers can enjoy them as well. Can you share with us the inspiration behind Heart of a Warrior?

AC: Driving through the Rockies Mountains quite a few years ago, I looked down into a valley and its dense forest full of shadow and wondered how it would feel to be lost down there? I pictured a young woman trying to find her way over the sometimes-impassible terrain, afraid and very much alone. How would she survive? How would she find her way through such an impossible labyrinth of valleys and peaks, rivers and lakes? What if she was pregnant and there was no civilization for hundreds of miles…except maybe a village of a people she couldn’t even communicate with?

I wrote her story, enjoying her adventure and the finding of her courage and faith. And then, a few years later, added another point of view—that of the Shoshone warrior who saves her. Writing from Towan’s eyes took the story to a whole new level, one that moved me very deeply. I think it is too easy for society to lump people into cultures and races, instead of accepting each person as an individual with their own experiences, outlooks, and challenges. After all, Jesus Christ is the Savior of us all.

RH: Wow, it sounds like your story has a lot of cultural relevance for modern readers. Before I let you go, can you share a little about what your working on now?

AC: Honestly, right now I am working on house renovations and canning fruits and veggies! But as soon as we settle back into school, I will go back to my Mountie series. I have been having a lot of fun with those stories!

RH: I marvel at how busy you are and how much writing you get done. Speaking of writing, can I persuade you to give us a little taste of Heart of a Warrior?

AC: Sure. I’d love to! Here’s a little bit from Chapter One.

Eyes clamped shut against the subsiding ache in her abdomen, Christina Astle sucked in cool mountain air. Pine saturated the breath and constricted her lungs like the corsets she’d happily given up only months earlier. Her hand stole across her extended stomach. What had she been thinking, agreeing to follow Anthony away from society, safety, and a house with four walls? What if they didn’t make it to Oregon in time? She refused to give birth with nothing but canvas overhead.

The wagon wheel dropped into another rut, and a gasp escaped her, drawing her husband’s gaze. “I’m sorry. I wish I could go slower, but we’re at least a mile behind them.” He glanced at the sun hovering above, then slipped the gold watch from his breast pocket and flipped it open. “It’s after three already.”

“I know…and I am fine.” Christina raised her chin a degree but refused to look at him and his perpetually concern-laden eyes. Anthony did everything within his power to keep her comfortable, stopping often, even when it meant trailing behind the rest of the wagon train. As long as they caught up by nightfall. Still, heat rose in her chest. They should have waited another year, or—better yet—never left Cincinnati in the first place.

The crack of a discharging rifle pierced the valley and deepened into echo. Then a scream, soft and haunting. More gun fire followed, ricocheting off the high mountain ridges.

The wagon lurched to a halt, and Christina grabbed for the seat. She stared ahead at the empty trail scarred with evidence of those who led the way. Horses. Cattle. Families with children. God, no!

The wagon jerked and rocked off the trail, reins slapping the backs of the mules.

Christina dug her fingertips into the raw wood. “What are you doing?”

“I’m taking it away from the trail. I’m not leaving you sitting in plain sight.”

“Leaving me? You can’t. We don’t know what’s going on.” Her head spun. “No, Anthony. Not with these mountains full of savages. Don’t you dare leave me here.”

The wagon tipped slightly then righted, dropped over the slope, and rolled into an aspen grove. White bark glimmered in the bright sun, and young saplings sprang back into place as the wheels passed over.

“There’s only one way to find out what’s happening. If they’re being attacked, they’ll need help.” Anthony lunged to the ground and unharnessed the mules, fastening them farther out of the way. All except the one trained to ride. Anthony left him near the wagon, heaving a saddle over his withers and forcing a heavy bit into his mouth.

He said nothing as he loaded his revolver and strapped it to his thigh. With the Winchester tucked under his arm, he swung onto the back of the animal and twisted the reins through his fingers. “You’ll be safe here. Most likely it’s nothing.” He looked away, giving the mule an angry kick. The animal balked but lurched to a trot toward the trail.

He rotated in the saddle enough to meet her gaze and yanked back on the bit. His brown eyes studied her face, and his chest released a sigh. “Chris, I have to go. You know where the other rifle is, and the shells are under the seat if you have any need of them. I’ll be back soon.”

Christina sagged against the back of the wagon seat. The edge bit her spine. Hooves scraped the loose rock of mountain trail and faded with the distant gun fire.

This Giveaway is now Closed!

Congratulations to our winner, Andrea DeDeaux!!

Angela is giving away a $5 Amazon gift card to one lucky Romancing History reader. To enter the drawing, please tell us if you’ve ever traveled to the Rocky Mountains.