As a history buff, I love a good story or an interestingly odd fact from the past. Here are seven snippets I’ve discovered about life in 17th and 18th century America!

1) Wall Street, or “de Waalstraat” in the original Dutch, received its name in 1644, when a wall was constructed around lower Manhattan to protect cattle from marauding Indians. During the 17th century, Wall street was also a market for slave trading and the site of Federal Hall, the city’s first government center.

2) Margaret James, of Charlestown, Massachusetts, was the first person convicted of witchcraft in America. She was executed on June 15, 1648, nearly 50 years before the beginning of the Salem witch trials. 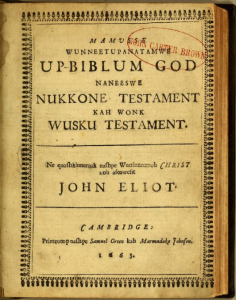 3) The first Bible printed in America was printed in 1663—in the Algonquin language. John Eliot, a pastor in Roxbury, Massachusetts, learned the dialect in the hopes of developing a written language to evangelize the Algonquin people. The book, which became known as “Eliot’s Indian Bible,” took more than ten years to translate into the Natick dialect of the Algonquin people. Eliot was assisted by John Sassmon, a member of the local tribe, whose ability to speak and write English proved invaluable to the project.

5) The Scarlet Letter, a novel by Nathaniel Hawthorne, was inspired by a Puritan law against adultery passed in 1695. The law required people convicted of the offense to wear a letter “A” on a conspicuous part of their clothing for the remainder of their lives. Adulterers were also liable to receive a severe whipping of forty lashes and were required to sit on the gallows with chains about their necks for at least an hour. Harsh as these penalties were, only a few years earlier the punishment for adultery was execution.

6) In 17th and 18th century America, it was customary to provide funeral guests with gifts such as a black scarf, a pair of black gloves,  or a mourning ring. One Boston minister noted that he possessed several hundred rings and pairs of black gloves. During the Revolutionary War the custom of giving scarves and gloves was abandoned since the items could no longer be imported. Instead, people began using black armbands as a sign of mourning. 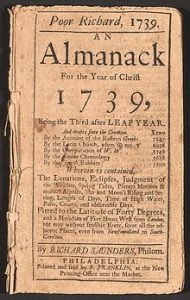 Your turn. Which of these historical tidbits tickled your fancy?