I’m currently reading Lioness, the first book in the “Daughters of Zelophehad” series. If you haven’t had a chance to read this one yet, or any of Barb’s books, I encourage you to check out her Amazon page here and start reading. Her stories are filled with action, Biblical history, and characters that grab your heart.

Barb has generously offered an E-copy of Heavenly Lights to one Romancing History reader. So, be sure to see the details at the bottom of the post. 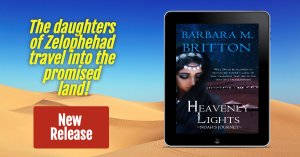 I am happy to be spending my release day for Heavenly Lights: Noah’s Journey with my friend and fellow Pelican author, Kelly, and with all her blog readers. When I started writing about the daughters of Zelophehad, I only thought I would write one book. After I finished my manuscript, I realized these brave sisters did not have their inheritance of land. The girls had the promise of land, and they were told who they could marry, but they didn’t own anything yet. The Israelites took more than seven years to conquer Canaan, and if I included all of the stories in the book of Joshua in my manuscript, I would have a 100,000-word story. Publishers do not buy books of that length anymore. I decided to follow the sisters through the book of Joshua with two more books—Heavenly Lights and Claiming Canaan. Easy, right?

Heavenly Lights would have been easier to write if I hadn’t made my hero in the story a shepherd who couldn’t hear and who couldn’t speak (This is why my advice to authors is to plan a series before you write it). What was I going to do with Jeremiah, a shepherd, and Noah’s love interest (Noah is a woman for those who haven’t read my novels)? Before I panicked too much, I realized that I could write a deaf character since my mother had lost her hearing. I knew firsthand the issues involved in communicating with someone who can’t hear.

American Sign Language did not exist in the period of Joshua and the daughters of Zelophehad. I had to create hand signals that Noah and Jeremiah could share. Personally, I do not know ASL, but I have specific hand movements that I use with my mom.

Noah would have to incorporate certain communication skills into her life. What would those be?

She would have to face Jeremiah when she spoke to him, so he could read her lips. She might have to touch him to get his attention if he was focused on his flocks. Yelling across a field is useless. I learned calling from another room to my mother wasn’t going to get a response. I laugh when she calls to me from another room. I have pretty good hearing, but sometimes I can’t figure out what she is saying.

At times, you may have to repeat what you say to someone who has a hearing deficiency. I find after three attempts that a talk-to-text app on a smart phone works well, or a small white board with Expo markers gets my point across. Of course, Jeremiah doesn’t have an i-phone and he certainly doesn’t have a caption phone. I gave Noah a healthy helping of patience and understanding to befriend Jeremiah.

If someone has a small amount of hearing left, a pocket talker can magnify words into a good ear. Technology was nil in the days of the daughters of Zelophehad, and unfortunately deaf people were seen as being cursed. When I crafted Jeremiah, I gave him an awareness of his surroundings that was unique. Jeremiah’s faith in God did not waver even though he faced challenges being deaf.

Would I change Jeremiah’s character if I had it to do it over again? Nope. Jeremiah is perfect the way I created him. He is one of my favorite characters and so far, he is a favorite of readers, too. Noah isn’t too bad herself.

I hope you enjoy my story about the daughters of Zelophehad and how they go forth with God into the challenging times of the conquest of Canaan. A rugged shepherd is by their side and so is the Good Shepherd. 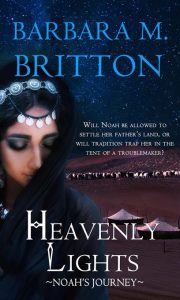 Noah bat Zelophehad might have broken tradition by being able to inherit her father’s land, but her heart’s desire is to have the finest herds in all of Israel, something an orphaned and unmarried woman has never achieved.

Jeremiah ben Abishua cannot speak, nor hear. God has made his thoughts captive to his mind. But he can communicate with one shepherdess, a woman who sees his skill with animals and treats him like a man worthy of respect.

When their people disobey God and incur his wrath, Noah and Jeremiah must overcome tragedy in order to change perceptions in the tribes of Israel. Will their kinship desire to care for one another and the four-legged creatures God has placed in their care, be able to flourish in a land filled with enemies of the One True God?

God gave Noah bat Zelophehad four sisters, a way with four-legged creatures, and a strong spirit. She will need all three gifts to thrive in the Promised Land of God and find love with a special shepherd. 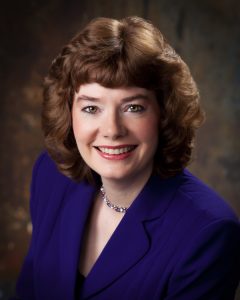 Barbara M. Britton lives in Southeast Wisconsin and loves the snow—when it accumulates under three inches. She is published in Biblical fiction and enjoys bringing little-known Bible characters to light in her stories. Barb is a member of the American Christian Fiction Writers, the Society of Children’s Book Writers and Illustrators, Romance Writers of America and Wisconsin Romance Writers of America. Barb has a nutrition degree from Baylor University but loves to dip healthy strawberries in chocolate. Find out more about Barb’s books on her website, or follow her on Twitter, Facebook, or Goodreads.

Congrats to Nicole, the winner of a copy of Heavenly Lights!

The Daughters of Zelophehad series is about a group of women who change history by seeking and securing a land inheritance that was unheard of in their day. To enter the drawing for the E-copy of Heavenly Lights, tell us what aspect of being a woman in Biblical times would be the most challenging for you.