To Disguise the Truth & a Giveaway 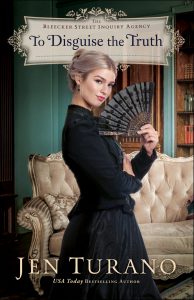 When a man arrives at the Bleecker Street Inquiry Agency, anxious to hire them to find a missing heiress, Eunice Holbrooke realizes her past has finally caught up with her . . . and that she may no longer be able to hide under the disguise that has kept her safe for so long.

Arthur Livingston’s goal in life is to make his mark on the world as a mining industrialist, but after the man who could help him achieve his goal is murdered, Arthur feels compelled to seek justice for the family–but he’s left with more questions than answers after the eccentric Bleecker Street Inquiry Agency refuses to take on his case.

Desperate to conceal her real identity and avoid the irritatingly handsome Arthur, Eunice takes on a different case that requires her to go deep undercover and entangles her in one troublesome situation after another. When other secrets come to light, Eunice has no choice but to confront her past, hopeful that it will set her free but knowing it could very well place her life–and the lives of those she loves–in jeopardy.

I’m a huge fan of Jen Turano’s books and To Disguise the Truth didn’t disappoint. Right from the fantastic opening line Turano drew me in and kept me turning the pages with the wit and charm of her very quirky but endearing characters.

Her most recent heroine, Eunice Holbrooke, was no exception. Unwilling to shed the Widow’s Weeds she has been wearing throughout the series, Eunice finds herself confronted with a man from her past when her newest potential client wants to hire the Bleecker Street Inquiry Agency to find HER!! Although Arthur Livingston’s appearance may seem a bit brash at first, he does have a heart of gold and turns out to be a perfect match for Turano’s feisty heroine.

Although you are sure to laugh out loud while reading this book, To Disguise the Truth, like all of Turano’s novels, sheds light on some aspect of history that readers may not be well-acquainted with. In this novel, the author examines the conditions inside mental asylums and how horribly easy it was for a woman to be committed during the nineteenth century when Eunice goes undercover on a case at the Blackwell Island Insane Asylum.

I loved that Turano incorporated all of the characters from the series, even if some had only a brief appearance on the page. What a fun way to wrap up the series.

I listened to this book on Audible and would like to say that the narrator, Andrea Emmes, did a fantastic job bringing the characters to life, especially Turano’s hilarious one-liners. If you enjoy audiobooks, I highly recommend this series!

If you enjoy a light-hearted mystery filled with twists, turns, and plenty of witty banter, then you’re sure to be delighted with To Disguise the Truth.

“Considering she’d once shot the man sitting across from her, Eunice Holbrooke was beginning to get the sneaking suspicion her past had finally caught with her.”

“It was rather astonishing how much one could apparently glean from reading a vast assortment of romance novels.”

“Eunice is not what anyone would consider normal.”

“…there’s something shifty about a bookstore owner who doesn’t sell Jane Austen.”

“The thought sprang to mind that she might have once again been a tad too direct, that idea reinforced when a blink of an eye later she found herself staring down the barrel of a pistol.” 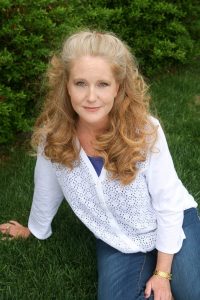 Named one of the funniest voices in inspirational romance by Booklist, Jen Turano is a USA Today bestselling author, known for penning quirky historical romances set in the Gilded Age. Her books have earned Publishers Weekly and Booklist starred reviews, top picks from Romantic Times, and praise from Library Journal. She’s been a finalist twice for the RT Reviewers’ Choice Awards and had two of her books listed in the top 100 romances of the past decade from Booklist. She and her family live outside of Denver, Colorado. When she’s not writing, she spends her time outside of Denver, Colarado. She is represented by the Natasha Kern Literary Agency.

I’m giving away an eBook copy of To Disguise the Truth. Jen’s books are laugh out loud funny! To enter the giveaway, share a favorite quote from one of Jen’s books! If you’ve never read one of her books, tell me which of the quotes above tickles your funny bone the most.